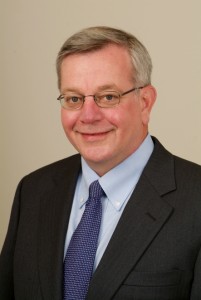 Brian Walsh has been an active member of CCBFA since he joined the Broker Education Committee in 1994.  Since that time he has conducted dozens of educational seminars for the Association and actively
served to organize and facilitate the Association’s monthly seminar series.  In 2015 he was received the President’s Award from the CCBFA for his service to the organization.

Brian began practice with Barnes, Richardson & Colburn upon graduation from Law School 1985.  Since that time he has had experience, and notable successes, in virtually aspect of Customs and International Trade Law practice representing importers, exporters, brokers and domestic industry members.  While the majority or his time is devoted to import and export compliance matters, he has successfully litigated cases before the United States Court of International Trade and The Court of Appeals for the Federal Circuit and has settled several multi-million dollar disputes in advance of trial.  He has also been very active in the area of antidumping and countervailing duty law including representation of a major petroleum company in the largest antidumping case in U.S. history filed against imports of crude petroleum from Saudi Arabia, Venezuela, Mexico and Iraq.

Brian is a graduate of James Madison College of Michigan State University and the Loyola University of Chicago School of Law.